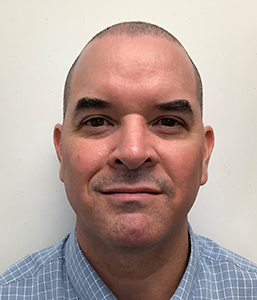 Dr. Ricardo Padilla grew up in Guatemala, where he obtained his B.S and D.D.S. degrees from Universidad Francisco Marroquin. Roman Carlos inspired him to complete a 3-year Residency in Oral and Maxillofacial Pathology at the University of Florida under the tutelage of Ron Baughman, Harvey Kessler, and Anne Jones. Subsequently he completed a Head and Neck Surgical Pathology Fellowship at The University of Texas Health Science Center at San Antonio under the instruction of Stan McGuff, Tom Aufdemorte, Anne Jones, Kay Amin, Joe Rinaggio, and Jerry Alderson.

He was lucky to be recruited by Valerie Murrah to work at the UNC School of Dentistry in 2002, where he has been to this date. He is the Kaneda Distinguished Professor of Oral and Maxillofacial Pathology, and since 2006 is the Program Director for the Advanced Dental Education Program in Oral and Maxillofacial Pathology. His practice includes Clinical Oral Pathology and participation in the UNC Dental School’s Biopsy Service. Together with Valerie they read over 8000 cases per year and teach all undergraduate, graduate, and postgraduate courses. His days are better thanks to his awesome Residents and Alumni: Al Dovigi, Patricia DeVilliers, Steve Press, Liz Andrews, Jim Rokos, Jessica Shireman, Danny Mora, Tiffany Peters, Austin Davies, Sasha Betz, Andres Flores, Si On Lim, Hiro Nakamura, Sara Albastoni, Makayla Gresham, Leen AlQudah, and Nicolette Abate.