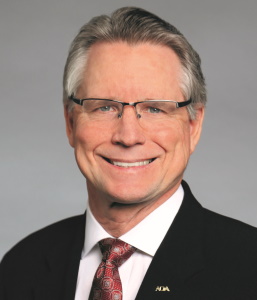 Dr. Daniel J. Klemmedson, an oral and maxillofacial surgeon in Tucson, Arizona, is the president of the American Dental Association. From 2015 to 2019, Dr. Klemmedson served as the Fourteenth District trustee to the ADA Board of Trustees and served in the ADA House of Delegates from 2004 to 2014. He is a past president of the Arizona Dental Association, the Southern Arizona Dental Society, the Western Society of Oral and Maxillofacial Surgeons and the Arizona Society of Oral and Maxillofacial Surgeons. During Dr. Klemmedson’s career, he has received numerous awards for his dedicated service.
Dr. Klemmedson earned his dental degree from the University of Southern California (USC) School of Dentistry and his medical degree at the USC School of Medicine. In addition to maintaining a private practice in Tucson, he is an attending oral and maxillofacial surgeon on the cleft palate and craniofacial team at Children’s Clinics.